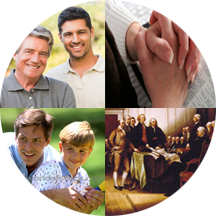 Men, we have a big-time responsibility! Let us take the task of raising our families with seriousness and with passion! Remember Proverbs 3:32, “For the LORD detests a perverse man but takes the upright into His confidence.” Let us lead with His Confidence!

When I think “father,” the word first invokes my relationship with the person who irrevocably shaped my own life.  When recalling my early trials with my father, I’m reminded of a great quote attributed to Mark Twain: “When I was a boy of 14, my father was so ignorant I could hardly stand to have the old man around. But when I got to be 21, I was astonished at how much the old man had learned in seven years.”

“Father” next evokes my relationship with my heavenly Father, my Creator. That relationship has also experienced great trials, but He has stood by me through all my trials and tribulations.

Of course, “father” also brings thoughts about my relationship with our children, and that is precious beyond words — a greater gift I could not imagine.

Finally, the word “father” evokes the heritage given to us by our our Founding Fathers.

These four contexts for “father” — God the Father, my own earthly father, my role as father to my children, and the legacy of our forefathers — combine to create a rich and abiding sense of what fatherhood means, what it should look and feel like in heart and practice.

But for tens of millions of Americans from broken homes, the consequences of failed fatherhood are the enormous obstacles their children must endeavor to overcome in relationships with their Creator, with their own spouses and children, and in their ability to honor their forefathers’ legacy. In 295 B.C., Mencius wrote, “The root of the kingdom is in the state. The root of the state is in the family. The root of the family is in the person of its head.”

The Father Factor, the statistical social and cultural consequences when fathers abandon their natural role, is well documented. Nowhere are those consequences more evident than when fatherless children, in their relentless pursuit of approval never provided by their own father, become overachievers and ascend to positions of power. The pages of 20th-century history are rife with the terrible misdeeds of those who were raised without fathers, or with abusive or ineffectual fathers: Adolf Hitler, Joseph Stalin, Mao Zedong, Saddam Hussein, Osama bin Laden and many others of lesser infamy.

Among those who have risen from broken homes to positions of political power in our own nation the most notable examples in recent history are Bill Clinton, Al Gore, Ted Kennedy and, of course, Barack Hussein Obama. There isn’t much we can do for those whose sense of self has been irrevocably imprinted by the lack of a functional father, but there is plenty we can do to ensure the next generation is burdened with fewer of them. That duty begins with fathers. Effective fathering requires real men, and there are plenty of them out there.

Above all, the greatest inheritance I hope to leave my children is not material, but spiritual. “I have no greater joy than this, to hear of my children walking in the truth.” (3 John 1:4) In the words of the Father of our Nation, George Washington, “May the Father of all mercies scatter light, and not darkness, upon our paths, and make us in all our several vocations useful here, and in His own due time and way everlastingly happy.” (1790)

So in the words of the movie, “Courageous”…“I don’t want to be just a dad…”

I want to be a great Dad! A courageous Dad!” So how ‘bout Dad’s of courage – Will you rise up?

This site uses Akismet to reduce spam. Learn how your comment data is processed.